Last weekend M and I went to see The Guardians of the Galaxy again (I really didn’t want to have to study, plus I’m a big fan of Rocket and Groot). I knew I wanted to wear this dress because it would be one of my last opportunities this year as it looks crap with outerwear. I wanted to really exaggerate the shape so I added my petticoat underneath. It had such a lovely retro feel I thought I’d stick with it by adding this shoes to the mix:

Okay, so these shoes aren’t really retro but the print of these Melissa Peace Wedges is reminiscent of a past era and the tassel detailing just adds to that, it’s more a 70’s feel but then the shoes are plastic so they have a very modern effect as well and overall I thought they were okay with the dress. There’s some blue in the print (which helps) and basically, I just really wanted to wear them ever since I bought them. I wore huge dangly butterfly chain earrings (which you can’t really see in the outfit photo so I took a quick photo of one of them). The are really pretty and luckily aren’t too heavy either. 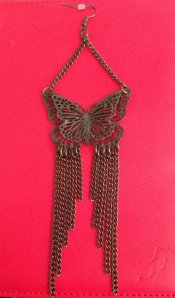 Anyways, then I just added my watermelon clutch and put on some make-up (hello, fierce brows!) and I was done. I actually really didn’t know which bag to take and this one was handy. I mean, it doesn’t really go with the outfit, at least in theory, but then it sort of works, doesn’t it? Anyways, I love it. I recently ordered the New Look milkshake clutch and the burger clutch (Asos is STILL processing my order. I placed the order on the seventh. I am beginning to get impatient!), I think the milkshake one would have been perfect for this look. But I’m glad I took my watermelon bag (though I was joking that I could have used an entire melon instead of just a slice! I always want to take loads of things with me and M usually keeps his wallet in my purse/handbag so that he doesn’t have to have it in his pocket.) But back to the dress:

It’s from Debenhams (their 2013 summer collection) and it’s a navy blue eyelet lace dress. I’ve worn it once before (last summer to a friend’s wedding) and it’s a really nice, high quality, summer dress. It has a navy blue slip underneath because otherwise it would be rather see-through. I think the model looks especially lovely in it. I don’t have any photos from the wedding where you could see the dress in any good detail, so I won’t be posting any. I’ll just add one more photo from our movie date because it is so strange! Taking photos in a dark theater entrance, I asked M to use the flash and this was the result. It’s a purple world.