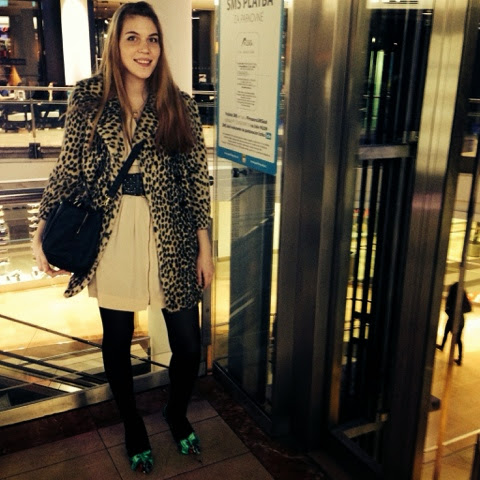 In this issue of Favorites we take a look back to some of my favorite shoe moments from 2014. It won’t be a complete best-of list as some of the shoes from my collection haven’t been worn yet this year, but close enough. March in particular was fruitful, or well shoeful, it had been a very good month mainly due to the lack of snow or ice we had this year. I’m willing to say it was the best winter ever! 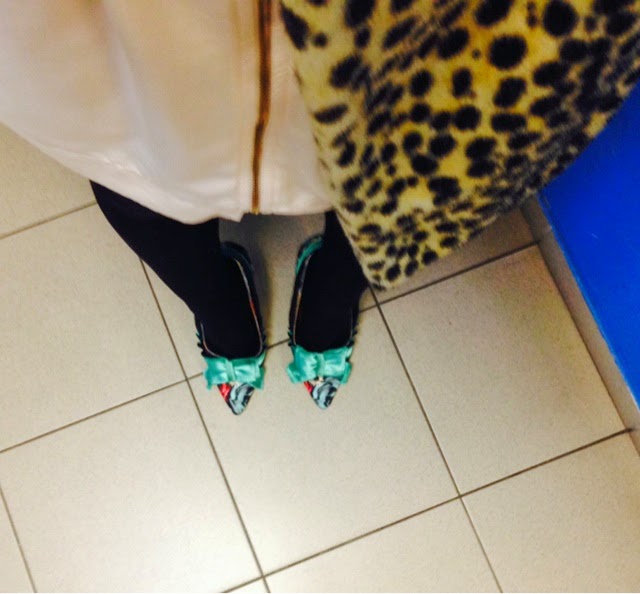 To begin with, these are one of my favorite killer heels. Killer being the operative word here, these shoes are painful! From the 2010 Lanvin for H&M collection, these courts have a lovely floral print and a beautiful bow. This is definitely a statement shoe and I kept most of my outfit simple (H&M dress, Topshop studded belt, H&M studded bag), though I did spice things up with my lovely Topshop leopard print coat. We went to see The Grand Budapest Hotel and it was a magical evening. 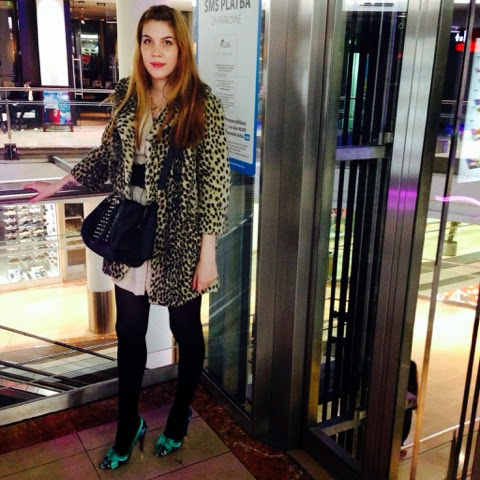 I remember I was so happy when I bought these. I had a late uni class (creative writing, fun times) and I stopped by H&M on the way and scored the last pair they had. Actually, they had two pairs, both the same size (European 39) and one had been a “try on” pair and one was in storage. Stupid foolish me, I bought the one that had been in storage (and thus no one had been trying on) and it’s a tad smaller than the other pair had been (as people had been trying on that pair and it was a bit stretched out). So in all honesty, I could have either used a size up (with pointed toe shoes, I prefer a size 40) or should have bought the pair that had been stretched out. Oh well. I still love them. 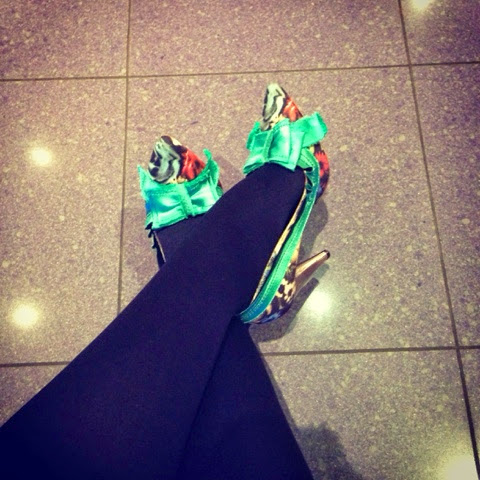 The next pair is another H&M designer collaboration, this time with Maison Martin Margiela. The invisible wedge boots are one of my most prized shoes. I bought them in a winter sale in 2012 while I was on the hunt for gifts for friends and family. I’m really happy I bought them for even though they aren’t shoes that I would wear too often, I think they are shoes that are completely unique and have a bit of magic to them.

I love that it kind of looks like I’m walking on air. I wore them to a family lunch (also in March) and I based my outfit around the boots, I definitely wanted them to be the focal point of the entire look. It’s like the complete opposite of the first look actually. There it’s all crazy thanks to Mr. Leo (though I must say, I was proud of myself for that outfit) and here it’s all neutral and a bit retro. 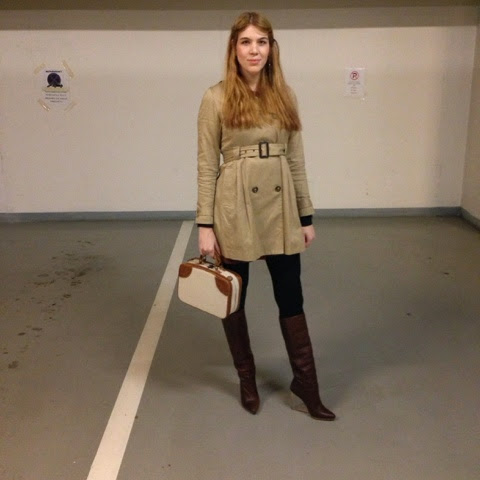 As I mentioned, while styling these boots I knew I wanted to have a neutral and brown palette. It wasn’t that cold so I got away with wearing a trench coat (H&M) instead of a proper winter coat. The bag is a vintage-esque vanity bag from Stradivarius and the belt is one of my favorites (Topshop), the earrings were a gift from my bestie and I also wore a black Pull&Bear cardigan. As for the dress (Zara), on the label it says that it’s actually a shirt. But I think it’s a dress and I wear it as one (albeit with a pair of opaque tights). It’s actually longer than some of my dresses haha.

The next pair are a fun pair of flats (Melissa “Blueberry bow” flats in black), also worn in March – I can’t believe it was so warm! I think  it was actually warmer then than it is now. I wore them on a lazy Saturday that consisted of shopping and going out to lunch. It was actually kind of perfect, I need more days like that. 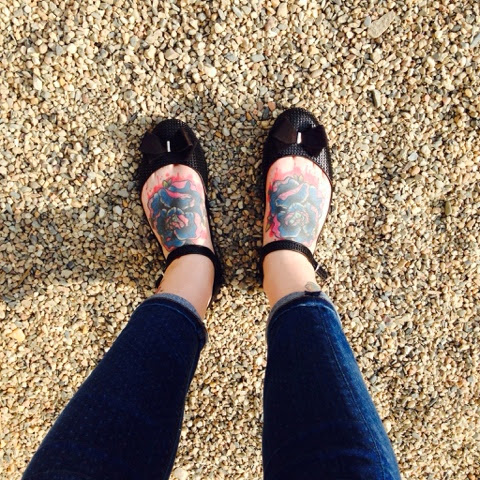 The next outfit (also from March, this may turn out to be a Favorites March 2014 post actually) was worn to an anniversary dinner date. I wore a mostly black and white outfit consisting of a favorite LBD (Reserved), a little black sweater (Promod) and a beautiful 3/4 sleeve white coat (Zara Woman). The monochrome effect was broken up by the leopard print handbag (Liquor brand) and the shoes (Iron Fist “Bitches” Peep Toe Platforms). 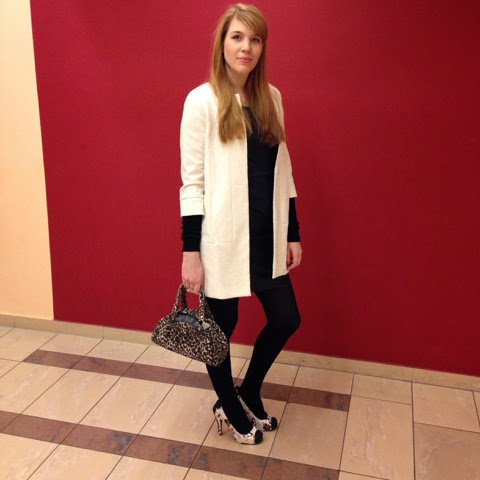 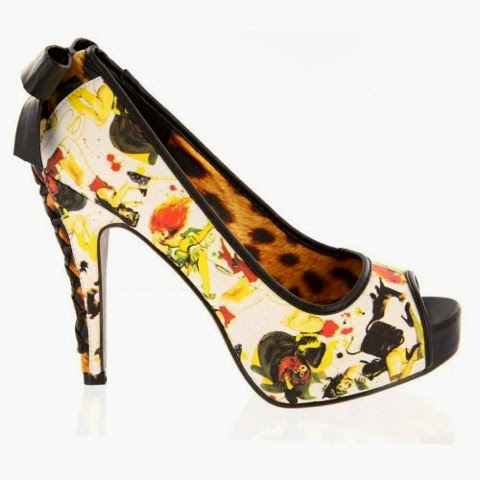 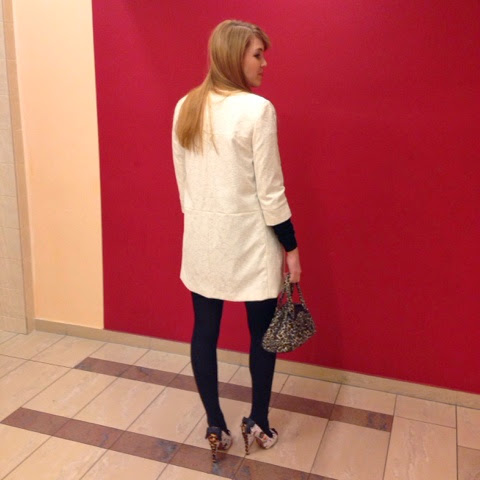 The back is so cute that I couldn’t resist! I adore the lacing detail, the bow and the pop of leopard print. I thought it made the shoes so much more interesting and that it worked quite well with the crazy print on the front. Sadly, I could have downsized and the shoes would have fit better but they were the last pair and they were on sale. Next time I just have to wear them without tights and maybe buy those gel thingies to adjust the fit. But I’m used to having sizing issues, all shoes are either too big or a tad too small. Luckily, fixing bigger shoes is much easier than fixing too small ones. 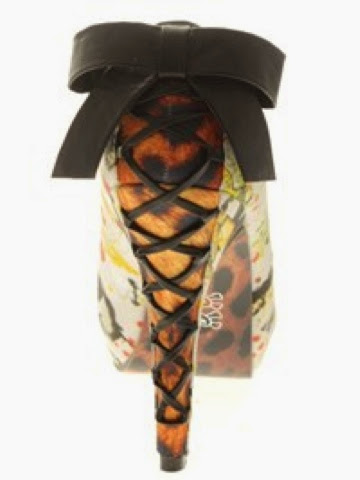 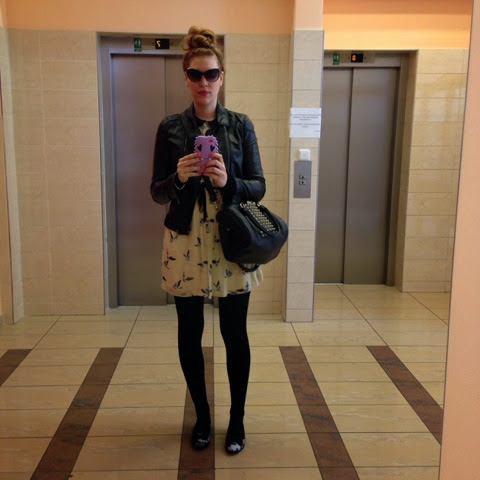 I like this outfit mainly because well I do love that dress (Zara bird print dress) but also because hey, I’m wearing sunglasses! (also Zara) I almost never wear sunglasses – I tend to forget them at home. And I hate that they leave a pressure mark on my nose if I wear them for a longer period of time than like 5 minutes. Annoying as hell. That said,  I still totally adore these sunglasses and will try to wear them more in the near future.

I mentioned the dress already but I haven’t said anything about the shoes. Don’t worry, I’m getting to it right now: they’re from Topshop and are a cute little pair of camouflage flats with a bow and they are the only pair of “camouflage” print shoes that I own.

I loved wearing the next pair – Bronx leather ankle boots. They are the perfect rock-chic ankle boot in my opinion. With some lovely buckle detailing, a chunky durable heel, I spent all night in these and it was completely fine. I wore them a lot in March and the outfit below is from a Saturday night out, we went dinner and then to the pub with friends. 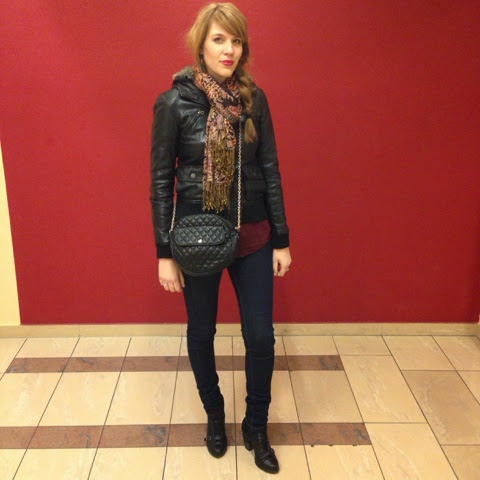 The next outfit is from a movie date when we went to the Shock Proof Film Festival, a tradition we look forward to every year. Though to be honest the festival has gotten a bit too popular for my taste as I’m not one for large crowds of people so I’m not sure about attending next year, maybe just for one night instead of trying to attend the most films possible (not that we do, well one year we did – we went four days in a row and each night we stayed for two movies, but that’s not part of our tradition or anything).

The shoes aren’t so important here, nope, they’re just a pair of H&M lace-up brogue-esque flats that have been bedazzled, but why this outfit is a part of my Favorites round-up is because I’m wearing my glasses. That’s right, I wear glasses. Well, I hardly ever wear them but on this night we went to see a foreign film and I wanted to be able to properly read the subtitles, in case my French wouldn’t hold up. 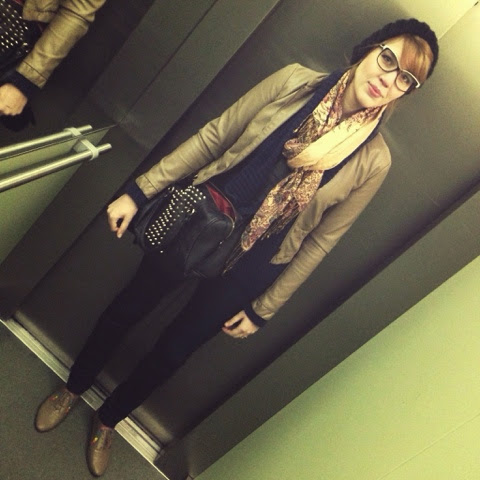 One of my favorite brands, that I sadly don’t own enough shoes of, is Irregular Choice. Now,  like Iron Fist, Irregular choice is definitely a brand that some people will hate while others will love. I adore quirky and unique shoes, so I’m on that band  wagon baby. These flats (sorry I don’t have a close-up photo) are incredibly cute with their little details, I’ll show you the next time I’ll wear them, promise. 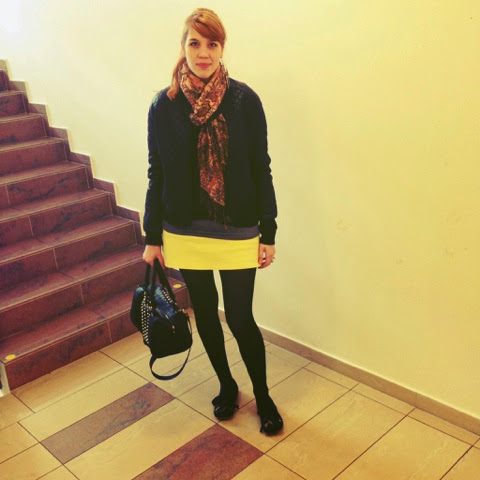 This outfit is also from a movie night at the Shock Proof Film Festival. (We went two days this year but only saw one movie each night.) Anyways, these shoes are one of my favorite pairs. They are insane. They have a distinct nineties feel to them and yet are still very modern. They’re from Zara Woman and are a beautiful pair of leather track ankle boots. 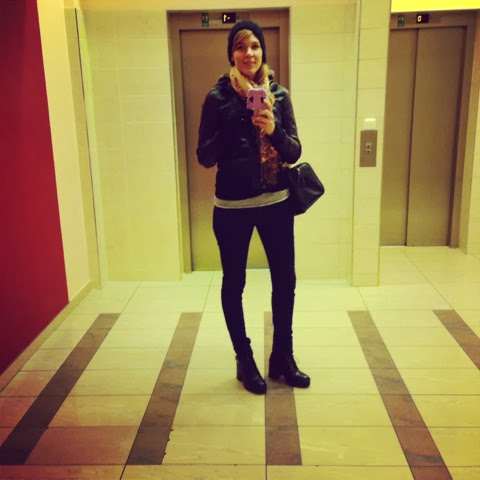 Wow, this is beginning to be a really long post. What can I say – March was seriously shoeful! Below are one of my favorite casual boots: Stradivarius tan boots with embroidery detailing. They have a bit of a western vibe to them but nothing costumey or ridiculous. Oh and they’re the perfect shade of tan to go with my Zara Office City bag. 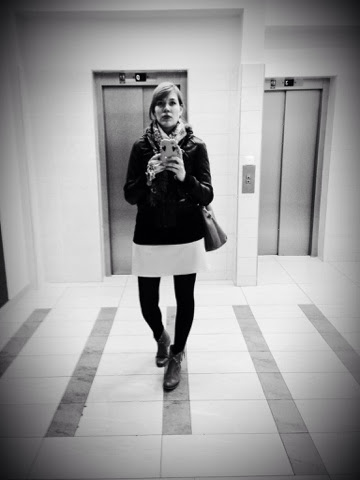 Because this post is already so long and so many of my favorite shoes are already present, I’ve decided to stop while I’m ahead. So yeah, this is definitely a March 2014 post. Looking back I must say that it was a wonderful time in my life and I’m glad that I got to relive it and share it with you. That’s one of my favorite things about Favorites – revisiting the past helps put things in a new perspective and also keeps me both motivated and inspired to do more of what I’m doing. I hope you enjoyed this post and let me know if you have any questions or suggestions or anything, see you next time.

4 thoughts on “Favorites: The Shoe Edition”